Skip to content
World Cup 2018: When England’s fun stops, stop – but could it actually be coming home?

World Cup 2018: When England’s fun stops, stop – but could it actually be coming home?

We have no meaningful wars now. Economic to the last drone-spilled drop. No principle, no patriotism in slinking off to some resource-rich-ragged land and maiming their children. Perhaps there never was.

England is only England in relation to the world and the world is only the world during the World Cup. When else could it be? The Eurovision Song Contest? All pastiche, irony and digital camp. Nobody ever died on a beach for irony. Except whales maybe. I’ve never thought the Olympics sufficiently tribal to rouse the agonising, magnetising belly connection that leads to flags on lawns. Maybe it’s the consolation prizes, the rowing, the torch or Usain Bolt. It doesn’t drag out the gizzards of my Englishness in the way this gorgeous fiasco does.

Whilst the neutral games are about pleasure and glory, France v Argentina a harmless and sensational spectacle, enjoyed on the sofa with my brother in law, a knock out game for England and my stomach becomes the theatre for an internal diorama where the decline and fall of empire is played out in my guts.

Is this condition particularly English? This roaring, melancholy-tinged patriotism? Surely other nations feel it? As Sting so presciently asked “Do The Russians Love their Children too?” He always was ahead of his time, I bet he was a vegan when The Police were playing Ceebee Geebee’s (if indeed they did).

Certainly the Russians seem to be revelling in hosting, their own national myth emboldened by the Spanish dispatch. Moscow squares bristling with stern jocundity. The World Cup suits Russia and it’s the best one for ages. We were told it would be a Slavic Hunger Games with English fans kettled and lashed if they so much as belched a bar of Vindaloo, instead, and perhaps this is just the weather, it feels like a real summer. A lazy, hazy, only half-woke slew of colour and unlikely victory.

And, tell me if this is the thing we always do, the same old mindless optimism dolled up in a waistcoat, but England could win, couldn’t they? Couldn’t we?

The game against Belgium was a banal enough placebo, No Harry Kane, no Eden Hazard, nothing at stake and for a moment the World Cup ayahuasca stalled and a glum material plane asserted; a man on a sofa drifting to the boneyard, organs waiting to fail. But then; the ‘better half of the draw’ story began to take hold. Logistical consolation swept away the temporary pang of defeat and the hallucination resumed. “We only have to beat Colombia, then Sweden or Switzerland and then…” These are the conversations on WhatsApp groups and talkSPORT that engorge my flaccid hopes.

People, grown men, are looking me in the eye and saying we can do it. Tell me this isn’t merely the fluffing for the ensuing grief, the tease, the hope that bares the chest before the chill blade of defeat is plunged. 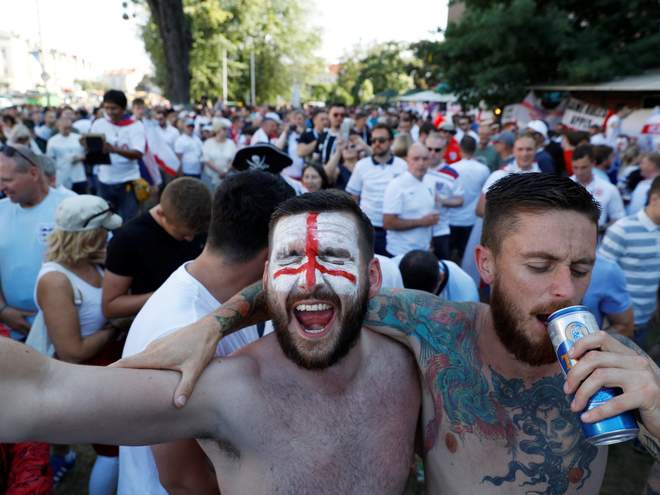 Tuesday’s game against Colombia is on ITV and whilst I can’t fault the other “to the death” spectacle they serve up, “Love Island”, for me occasions of national importance require the embalmed grip of dear Auntie, to lead me comfortably through the complexity. I need Gary Lineker and his working class nouse, his golden boots and pensive warmth, it is as if Des Lynam had a son who shaved off the avuncular in favour of a lighter knowingness. Forever appealing to us on the touchline in Turin to watch out for Gazza, “His head’s gone.”

It could just be the commercial breaks that you can’t speed through when watching live. Man, they want us gambling don’t they? Every commercial headed up by an endearing tough guy or loveable goon or pack of multi-racial mates urging us to painlessly stake our hard-earned on the next 45 minutes. “14-1 Modric to score.” Jesus Christ, my whole life’s a wager, I don’t need my adrenaline further piqued. They all bear the phatic placard “When the fun stops, stop.” Fun? Is that what we’re selling here? With beloved Ray Winston in a Minority Report utopia, surrounded by floating odds? Fun?

I can scarcely bear the pressure of my fucking fantasy football team propping up a 14 team league on a Sun App on the phone I’m now typing on. I’d only just taken M’bappe out to make way for Suarez and he, live on my TV set, snatched the Laurel from Messi’s ailing brow, like Elvis castrating Buddy Holly and crowned himself the new boy King of the world. The fun stopped there, I can tell you. And I was watching that match as a neutral. My passions don’t need the further fuel of a cheeky bet, not on the tightrope I walk, like that man on a wire between the twin towers whose feat was soon to be rendered untoppable by time and terror. If that’s fun it’s better not to start, forget stopping.

Tuesday, 6.15 then, a date with destiny on ITV. 90 minutes, what then? Extra time and, please God, no, penalties? I’ve cancelled work commitments to watch the Quarter Finals so I’ve probably already jinxed it. When the fun stops? I’d’v been euthanised when Maradona used his hands to fondle victory, not to flip birds. I’ve mates on the spiritual path who ask if it’s okay to ‘pray for England’ without getting into the role of the state in secular society I think we have no choice but to pray. Eng- ger- land, Jer-u-salem, thy will be done, at 10 to 1.