I Want to Believe (Russell Brand on England and World Cup)

The world isn’t made of atoms, it’s made of stories. The World Cup is an arena in which narratives are fulfilled. Heroes, villains, scapegoats, underdogs, triumphs, near-misses and tragedies, all are played out on a global stage, a pagan drama in a secular age.

Here I am, another World Cup, staying up late, worrying, hoping, like a heroine in a Motown song or Angie Watts, jumping back into the arms of my three-lion lover, murmuring the split-lipped refrain of the abused, “This time they’ve changed”.

If I could’ve told little eleven-year-old Russell, bereft in the asphalt wasteland of Little Thurrock Primary School as he listened to the bewildering lies of Jamie Dawkins (that England would be allowed to proceed in the tournament and that Diego Maradona’s Quarter Final hand ball had been retroactively banned by FIFA; he was the hardest kid in our school, I had no choice but to believe) that in 2014 I’d be once more, like a wincing white-coal fire walker, striding into the agonising known he’d’ve been dazzled.

It’s also likely that adult, time-traveller me would’ve been arrested because I’d’ve been unable to resist giving Dawkins a bit of a dig for all the bullying and that, along with my very presence in a primary school playground, would’ve been grounds for police intervention.

The excuse “I’m a time traveller from 2014 come back to warn my child self against the perils of forming an emotional attachment to England because it leads to heartache and contradicts my wider philosophy that nationalism is outmoded and conflagratory” would likely be greeted by the Essex constabulary as confirmation that they were indeed dealing with a paedophile and see me slammed in the cells.

As a child, in the spirit of Pulp’s “Disco 2000”, I’d often wonder where I’d be at the arrival of forthcoming World Cups, in ’86 when it first became relevant to me, the idea that in 2014 Gary Lineker, the Golden Boot winner, would be a silver-haired anchor and I at 39 would be older than every player in the tournament, would’ve been as inconceivable as refs using sputum sprays to mark 10 yards or a World Cup held in a desert due to alleged corruption.

When in Italia ’90 I heard that Cameroon’s Roger Milla was 38 I was amazed he could walk, let alone do that sexy pole dance he did at the corner flag to celebrate scoring, 38? It was like Father Christmas was in the team.

It is an indication of how indelible and deep the game’s grammar is seated that a relatively innocuous addition like the foam ejaculate seems so absurd and anomalous. It’s a highly territorial and aggressive piece of bureaucracy.

In the Spain vs Holland match the ref jizzed a blob of foam on Bruno Martins Indi’s bootie and the player looked furious. That moment would’ve been inexplicable to a viewer from the recent past, an aggrieved player berating the ref for spurting grog on his footwear. This addition lends further credence, though, to the beloved chant “The referee’s a wanker”.

Well, Spain have been thrashed. Arjen Robben, a Nobby Styles for our day, a man born bald, who’ll die bald and looked like a gnarled Woodbine-smoking mill worker when he was 16, tore through the world’s best team the way he tears through time, like it doesn’t exist.

Is it me or did he leave Chelsea about ten years ago? I thought he arrived at Chelsea with a reputation. Who is he, Benjamin Button? If Holland get to the final he’ll probably run out wearing a bonnet and a nappy.

It is this certainty that expectation can be subverted that provides an aperture through which our nation can glimpse hope. We, like hapless romantics, can use any co-ordinates we’re given to construct a narrative that aligns with our yearning.

I swear to you, I’d given up on England, like a hardcore fan that cares more about his club side than the wet festival of Jules Rimet. But like Michael Corleone, every time I think I’ve escaped they keep pulling me back in. Here are the threads that are leading me back to dreamland. 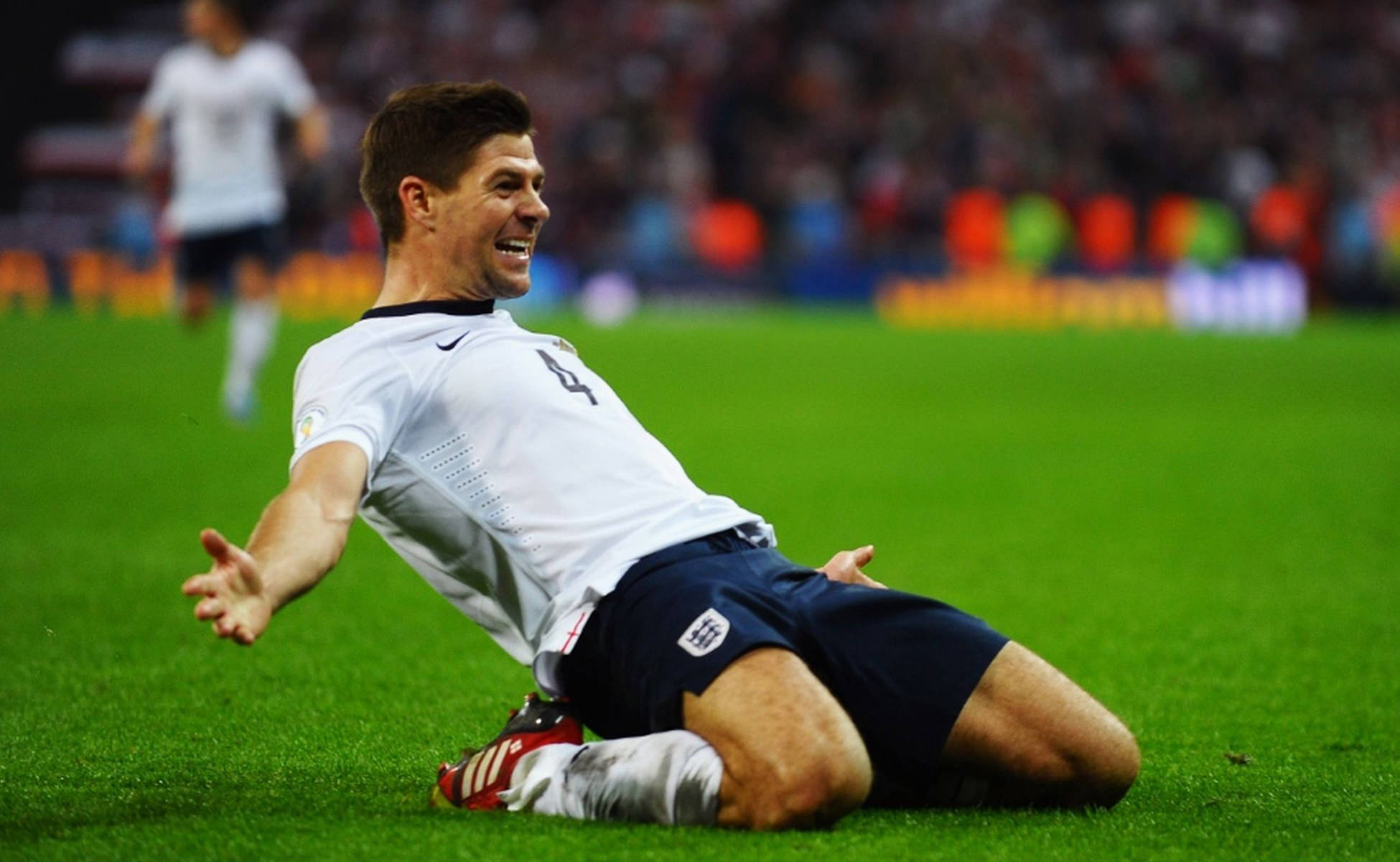 Firstly, Roy Hodgson. I like him, I mean I think he’s lovely, decent, proper, one of yer own. A Bobby Robson, granddad of the game. He exhibits I think the type of human values we subconsciously long for in a national patriarch. We know the score with England managers, we look for ways to dislike them; turnips, wallies with brollies, saucy Swedes, austere Italians; “do we not like them”.

I think Roy Hodgson’s polite and gentle defence of Wayne Rooney who provided an assist but looked out of position and frustrated on the left was deft and sweet. He weren’t having none of it. Gabby Logan asked if Rooney looked stymied and Roy said “he didn’t agree” and that Wayne had “set up our goal, with a fine piece of play”.

He also has soft r’s, which make language flow from him in a mellifluous stream, bubbling across flat rocks.

Rooney did look well wound up though and seems like he needs taking care of. I liken his frustration to erectile dysfunction. He knows what he’s got to do but the pressure, the knowledge of the open goal, hugs his mind to facile, vascular minutia and screws his rhythm.

Contrast him with the unencumbered youths that form the most obvious hooks upon which we can hang our optimism; Sterling and Barkley look invincible and priapic, like no one’s ever explained performance anxiety to them. Firing off shots and roaring across the painted turf, lead by purple, throbbing certainty.

Leighton Baines looked exposed, perhaps due to the lack of a tracking back midfield presence in front of him. I watched the game with my girlfriend and while there was a fair amount of clichéd enquiry and a demand to know X Factor type backstory of players to give her a way to care, she also did that thing that people who know little about a subject sometimes do and pointed out obvious flaws and features that were surprisingly astute. She announced midway through the second half that Baines was her “scapegoat” which was prescient as well as in keeping with the conduct of far more experienced fans.

The world isn’t made of atoms, it’s made of stories, the World Cup too is an arena in which narratives are fulfilled. Heroes, villains, scapegoats, underdogs, triumphs, near-misses and tragedies, all are played out on a global stage, a pagan drama in a secular age.

That is why I, a self-proclaimed clever person, will feel, not think, feel a visceral connection to the men in white shirts and antipathy to those in blue. I said some borderline racist stuff watching the game on Saturday. Well xenophobic, I mentioned the war, criticised Mussolini and tortellini. I truly believed that I had a connection to the carbon-composed, sentient life forms dressed in white that I didn’t share with those in blue. I believed that my life would be improved by a favourable result for the manufactured concept of “England” over the manufactured concept of “Italy”.

I hope the world has changed by 2018 and 2022 and 2026 and 2030. I hope we have found a way of uniting in spite of our differences, of extrapolating our connection to one another beyond prescribed sporting festivals. I hope we can create an identity that brings the world together under one banner of brotherhood, love and justice that we can all believe in. Those dreams are for future World Cups though and future worlds. For now, in 2014, I just want to believe in Raheem Sterling.