Skip to content
Russell on Margaret Thatcher: “I always felt sorry for her children”

Russell on Margaret Thatcher: “I always felt sorry for her children”

One Sunday recently while staying in London I took a stroll in the gardens of Temple, the insular clod of quads and offices between The Strand and The Embankment.
It’s kind of a luxury, rent controlled ghetto for lawyers and barristers, there is a beautiful tailor’s, a fine chapel, established by The Knight’s Templar (from which the compound takes it’s name) a twee cottage designed by Sir Christopher Wren and a Rose Garden; which I never promised you.

My mate John and I were wandering there together, him expertly proselyting on the architecture and the history of the place, me pretending to be Rumpole Of The Bailey (quietly in my mind), when we spied in the distant garden a hunched and frail figure, in a raincoat, scarf about her head watering the roses under the breezy supervision of a masticating copper. “What’s going on there mate?” John asked a nearby chippy loading his white van. “Maggie Thatcher” he said. “Comes here every week to water them flowers.” The three of us watched as the gentle horticultural ritual was feebly enacted, then regarded the Iron Lady being helped into the back of a car and trundling off.

In this moment she inspired only curiosity, a pale phantom dumbly filling her day. None present eyed her meanly or spoke with vitriol and it wasn’t till an hour later that I dreamt up an Ealing Comedy style caper in which two inept crooks kidnap Thatcher from the garden but are unable to cope with the demands of dealing with her and give her back. This reverie only occurred when the car was out of view. In her diminished presence I stared like an amateur astronomer unable to describe my awe at this distant phenomena.

Headmistress of our country

When I was a kid Margaret Thatcher was the headmistress of our country. Her voice, a bellicose yawn, somehow both boring and boring – I could ignore the content but the intent drilled it’s way in. She became leader of the Conservatives the year I was born and Prime Minister when I was four, she remained in power till I was fifteen, I am, it’s safe to say, one of Thatcher’s children. How then do I feel on the day of this matriarchal mourning?

I grew up in Essex with a single Mum and a go-getter Dagenham Dad. I don’t know if they ever voted for her, I don’t know if they liked her, my Dad I suspect did, he had enough Del Boy about him to admire her coiffured virility but in a way Thatcher was so omnipotent, so omnipresent, so omni-everything that all opinion was redundant.

As I scan the statements of my memory bank for early deposits (it’d be a kid’s memory bank account at a neurological Nat West where you’re encouraged to become a greedy little capitalist with an escalating family of porcelain pigs) I see her in her hairy helmet, condescending on Nationwide, eviscerating eunuch MPs and baffled BBC fuddy duddies with her General Zodd stare and coldly condemning The IRA. And the miners. And the single Mums. The Dockers. The poll-tax rioters. The Brixton rioters, the Argentinians, teachers; everyone actually.

Thinking about it now, when I was a child she was just a strict woman telling everyone off and selling everything off. I didn’t know what to think of this fearsome woman. 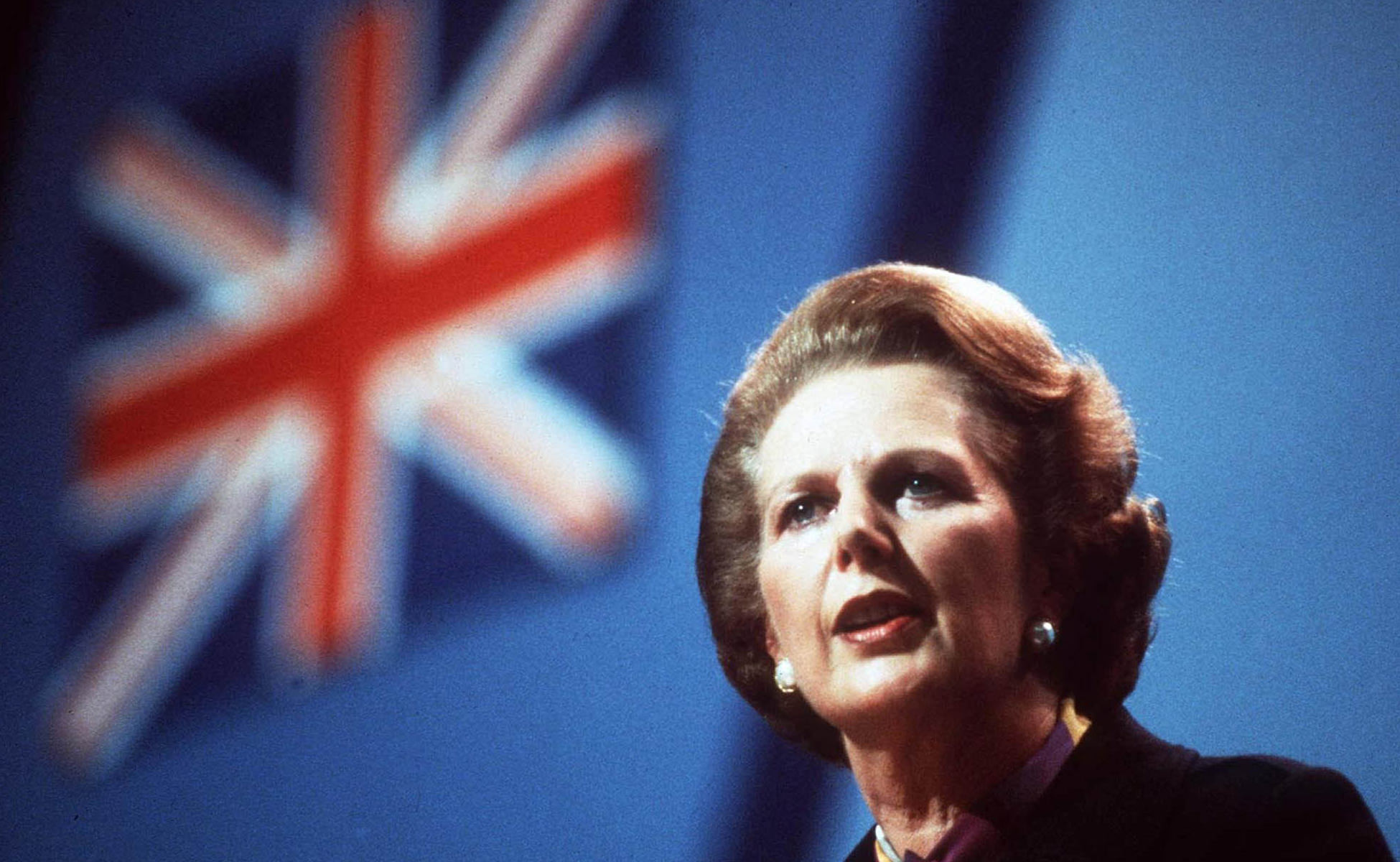 Perhaps my early apathy and indifference are a result of what Thatcher deliberately engendered, the idea that “there is no such thing as society” that we are alone on our journey through life, solitary atoms of consciousness. Or perhaps it was just because I was a little kid and more interested in them Weetabix skinheads, Roland Rat and Knight-rider. Either way I’m an adult now and none of those things are on telly anymore so there’s no excuse for apathy.

When John Lennon was told of Elvis Presley’s death he famously responded “Elvis died when he joined the army” meaning of course, that his combat clothing and clipped hair signaled the demise of the thrusting, Dionysian revolution of which he was the immaculate emblem.

It’s hard to glean much joy from death

When I awoke today on LA time my phone was full of impertinent digital eulogies. It’d be disingenuous to omit that there were a fair number of ding-dong style celebratory messages amidst the pensive reflections on the end of an era. Interestingly one mate of mine, a proper leftie, in his heyday all Red Wedge and right-on punch-ups was melancholy. “I thought I’d be overjoyed, but really it’s just… another one bites the dust…” this demonstrates I suppose that if you opposed Thatcher’s ideas it is likely because of their lack of compassion, which is really just a word for love. If love is something you cherish it is hard to glean much joy from death, even in one’s enemies.

Perhaps though Thatcher, “the monster” didn’t die today from a stroke perhaps that Thatcher died as she sobbed self-pitying tears as she was driven defeated from Downing Street, ousted by her own party. By then, 1990, I was fifteen, adolescent and instinctively antiestablishment enough to regard her disdainfully. I’d unthinkingly imbibed enough doctrine to know that, troubled as I was, there was little point looking elsewhere for support, I was on my own. We are all on our own. Norman Tebbit one of Thatcher’s acolytes and fellow “Munsters evacuee” said when the National Union Of Miners eventually succumbed to the military onslaught and starvation over which she presided “We didn’t just break the strike, we broke the spell”. The spell he’s referring to is the unseen bond that connects us all and prevents us from being subjugated by tyranny. The spell of community.

Those strikes were confusing to me as a child. All of The Tory edicts that bludgeoned our nation, as my generation squirmed through ghoulish puberty, were confusing. When all the public amenities were flogged the adverts made it seem to my childish eyes fun and positive, jaunty slogans and affable British stereotypes jostling about in villages, selling people companies that they’d already paid for through tax. I just now watched the British Gas one again, it’s like a whimsical live action episode of Postman Pat where his cat is craftily carved up and sold back to him.

“The News” was the pompous conduit through which we suckled at the barren Baroness, through newscaster wet-nurses, naturally, not direct from the steel teat. Jan Leeming, Sue Lawly Moira Stewart – delivering doctrine with sterile sexiness, like a butterscotch scented beige vapour. To use a less bizarre analogy; If Thatcher was the Headmistress they were junior school teachers, authoritative but warm enough that you could call them Mum by accident. You could never call Margaret mother by mistake, for a national matriarch she is oddly unmaternal. I always felt a bit sorry for her biological children Mark and Carol, wondering from whom they would get their cuddles. “Thatcher as mother” seemed, to my tiddly mind, anathema, how could anyone who was so resolutely Margaret Thatcher be anything else? In the Meryl Streep film it’s the scenes of domesticity that appear most absurd. Knocking up a flan for Dennis or helping Carol with her algebra or Mark with his gunrunning are jarring distractions from the main narrative; woman as warrior queen.

It always struck me as peculiar too when the Spice Girls briefly championed Thatcher as an early example of Girl Power, I don’t see that. She is an anomaly, a product of the freak-conomy of her time. Barack Obama interestingly said in his statement that she had “broken the glass ceiling for other women”. Only in the sense that all the women beneath her were blinded by falling shards. She is an icon of individualism, not of feminism.

I have few recollections of Thatcher after the slowly chauffeured, weepy Downing Street cortege. I’d become a delinquent by now living on heroin and benefit fraud.

There were sporadic resurrections; to drape a hankie over a model BA plane tailfin because she disliked the unpatriotic logo with which they’d replaced the Union Jack (maybe don’t privatise BA then) or to shuffle about some country pile arm in arm with a dithery Pinochet and tell us all what a fine fellow he was. It always irks when right wing folk demonstrate in a familial or exclusive setting the values that they deny in a broader social context. They’re happy to share big windfall bonuses with their cronies, they’ll stick up for deposed dictator chums when they’re down on their luck, they’ll find opportunities in business for people they care about. I hope I’m not being reductive but it seems Thatcher’s time in power was solely spent diminishing the resources of those who had least for the advancement of those who had most. I know from my own indulgence in selfish behavior that it’s much easier to get what you want if you remove from consideration the effect your actions will have on others.

Is that what made her so formidable, her ability to ignore the suffering of others? Given the nature of her legacy “survival of the fittest” – a phrase that Darwin himself only used twice in Origin Of Species, compared to hundreds of references to altruism, love and cooperation, it isn’t surprising that there are parties tonight in Liverpool, Glasgow and Brixton – from where are they to have learned compassion and forgiveness?

The blunt, pathetic reality today is that a little old lady has died, who in the winter of her life had to water roses alone under police supervision, if you behave like there’s no such thing as society, in the end there isn’t. Her death must be sad for the handful of people she was nice too and the rich people who got richer under her stewardship. It isn’t sad for anyone else. There are pangs of nostalgia, yes, because for me she’s all tied up with Hi-De-Hi and Speak and Spell and Blockbusters and “follow the bear”. What is more troubling is my inability to ascertain where my own selfishness ends and her neoliberal inculcation begins. All of us that grew up under Thatcher were taught that it is good to be selfish, that other people’s pain is not your problem, that pain is, in fact, a weakness and suffering is deserved and shameful.

Perhaps there is resentment because the clemency and respect that are being mawkishly displayed now by some and haughtily demanded of the rest of us at the impending, solemn state funeral are values that her government and policies sought to annihilate.

I can’t articulate with the skill of either of “the Marks”, Steel or Thomas, why Thatcher and Thatcherism were so bad for Britain but I do recall that even to a child her demeanour and every discernible action seemed to be to the detriment of our national spirit and identity. Her refusal to stand against apartheid, her civil war against the unions, her aggression towards our neighbours in Ireland and a taxation system that was devised in the dark ages, the bombing of a retreating ship – it’s just not British.

I do not yet know what affect Margaret Thatcher has had on me as an individual or on the character of our country as we continue to evolve. As a child, she unnerved me but we are not children now and we are free to choose our own ethical codes and leaders that reflect them.