Well I wasn’t expecting that, were you? The mad and sudden flux of adrenaline, the gush, the knackering rush. Together alone men took their tops off and Love Island was fucked off for Gareth Southgate’s post match interview. Domestic life was interrupted as the TV-cum – campfire lit up our shared homes and the primal flooded in and football did indeed come home.

And together we are struck. Because it’s not just a game is it? It’s not just twenty-two men, plus subs. Ninety minutes, plus injury time, plus extra time, plus penalties. Penalties, bloody penalties.

Viewed rationally all that was at stake was a football match against Sweden on Saturday, not life or death or even a new car, just another contrived contest against another constructed nation, but World Cup football is underwritten by a folkloric truth that is realer than real, truer than truth. Its ritual, its global spell summonses the leviathan from its slumber and lands it on your sofa.

As I pace my wife and her mates swapped tales on WhatsApp about their shirtless spouses. “What are they doing?” they ask as husbands like migrating birds or howling curs obey their inner nature and pray at the pop-up alter, willing Jordan Pickford to save more than a shot from twelve yards. We pray for him to save us from history.

Gareth Southgate has weeded from our hearts a root of ancient failure. The penalty curse, the English hex; that we must be unduly bested from the spot has finally been reversed. Voldemort is dead, Excalibur plucked, Darth Vadar’s mask lifted and the face that blinks back need not be feared. He’s just the bloke from the Green Cross Code commercial and that’s not even his real voice. 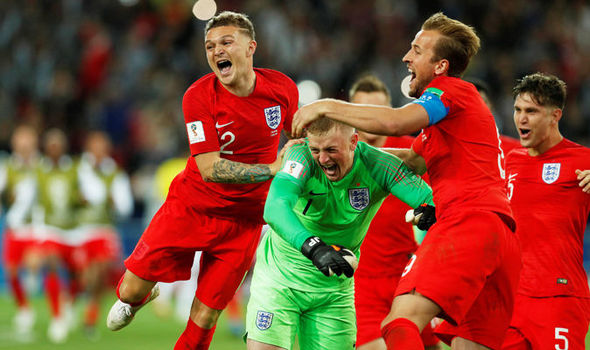 The ninety minute game was no great shakes. Scrappy and nasty; the upward headbutt into Jordan Henderson’s chin from that unrelenting bastard of a centre half (that Spurs will probably end up buying) neatly conveys the timbre. I observed in a low gear, watching the clock as much as the action. As we ticked into injury time, still one nil up but with the bias bending towards Colombia, I dutifully laid a place at the table for eleventh hour catastrophe and right on cue, it bundles in from a corner, the equaliser. Extra time. How can you have extra time? How can you supplement the infinite? Before that conundrum can be satisfactorily resolved though, the whistle sounds and fate decrees that this contest must be concluded by penalties, of course it’s penalties; that’s how destiny operates. You must face your greatest fear. Well not quite; the Germans are already out.

As the blackly anointed five walk the Green Mile from the centre circle I ponder which of these will bear the cross that Southgate has been wielding, borne since that other great footballing summer, Euro ‘96 when his missed penalty curtailed a surging nation’s stupid hopes. When Henderson’s kick was saved it was like the groan rejoined it’s still ringing predecessors, like they hung in the air about me, bleak and ghostly bunting, adorned with the grey faces of Waddle, Batty and Pearce. But then fuck of fucks, Pickford saves, Dier scores and, and, well you know, you were there. We were all there, together apart and suddenly shirtless. My dogs wonder what all the fuss is about. Maybe Saturday evening we’ll all wonder what all the fuss was about. Haters may say “It’s only football”, “It’s only Colombia” but nothing is only anything right now. Right now Gareth Southgate has bound up all our broken pasts into this delightful present and something of England, if there is an England, has been restored. And if the sole discernible outcome is a momentary spike in waistcoat sales then that will have to do, but I think it may run a lot deeper than that.